Embattled by rising maintenance costs, Alamitos Bay Marina initiated a program in 2005 to rebuild all 1,962 slips in seven different basins.

The timber docks dated from the 1960’s and were 20 years past their projected life span. No one at the City of Long Beach, California, imagined it would take the next 13 years to complete the project. 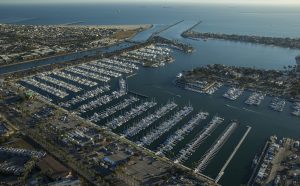 The operators of Alamitos Bay Marina, just south of Los Angeles in California, have undertaken a ‘journey’ to rebuild slips in seven different basins.

The marina is south of Los Angeles and enjoys a uniquely loyal customer base. There are tenants who have been there for decades whose children and grandchildren are also renting slips. Over time, neighboring tenants have formed tight communities.

The City’s marinas are operated by the Marine Bureau, part of the Department of Parks, Recreation and Marine. Three City-owned marinas total 3,337 slips: Alamitos Bay Marina, Long Beach Shoreline Marina and Rainbow Marina. Alamitos Bay is the largest marina in the U.S. The rebuild project started in 2005 and has been undertaken in phases. The final phase will be completed in mid-2018.

Reasons for the length of the project are size, environmental compliance and the timing of funding. Elvira Hallinan is the Marine Bureau Manager. “Most operators have a marina the size of one of our basins,” said Hallinan. “We had seven basins to rebuild. It wasn’t a project, it was a journey.” Delays caused by the Environmental Impact Review (EIR) were unanticipated. Contractors were ready to begin when the requirement for a full EIR delayed the start of construction.

Incremental funding created a number of starts and stops. Unable to fund the work, the City applied for and was awarded loans from the Division of Boating and Waterways of the California Department of Parks and Recreation. The loans were parceled out corresponding to project phases. Construction would halt until the next loan was awarded. In 2015, the Marine Bureau leapfrogged the financing problem and construction has been continuous since. 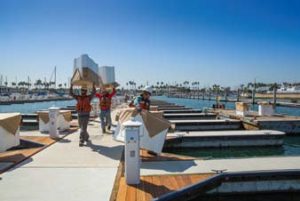 Reconfiguring for the Market

In the original marina, slips started at 20 ft (6m) in length. Boating evolved and smaller slips went unrented, but California Coastal Commission regulations protect the rights of small boat owners. The problem was resolved by trading small slips for two dry storage facilities, one with 164 racks and a soon to open facility with 100 more.

The Bellingham Marine concrete docks included rounded finger ends and wood trim at the triangle frames. All new Eaton electrical utilities and power pedestals provide 30A to 50A power. The marina offers pump-out receptacles within reach of every boat and individual receptacles for slips 40 ft (12m) and above.

“Most public marinas are designed by an engineer, put out for bid, and the low bidder is selected,” said Eric Noegel, Manager of Project Development for Bellingham Marine. “We call that the design/bid/build methodology. We used a design/build approach for this project – a much better option.”

The design/build method is based on the concept of a single entity who accepts full responsibility for designing and constructing a project from conception to completion. The more experience the firm has in the required disciplines (design, manufacture and construction), the more value it is able to create for clients. From the outset of the project, design, manufacture and construction expertise is brought to bear upon all components. Construct-ability and operating expense are evaluated against initial cost to optimize life cycle costs.

Very few public agencies are able to utilize a design/build approach. The charter of the City of Long Beach, however, allows the City to us a best-value selection process when the project involves a revenue-producing asset. The City has used this process with parking garages, so it recognized the value of a design/build contractor. Price was part of the scoring, but so were experience, product longevity, schedule, financial strength and warranty. “It turned out that we were the low-price bidder as well,” said Noegel, “but the City’s ability to evaluate the entire proposal, not just price, set this project apart.”

Design/build provides two advantages: a streamlined organization and the flexibility to respond to changes and unanticipated events. These attributes enabled the team to solve problems, make timely decision and keep the project on track.

Hallinan was the team leader. The team praised her management and communications skills and plain hard work. Everyone credited good teamwork for the project’s success. Ed Heaton was Bellingham Marine’s project manager early in the project. “What stands out,” said Heaton, “is the close interaction that came out of the design development process. If we thought it would help, Bellingham would suggest, ‘this might work out better,’ or, ‘here’s where your costs are.’ The others would listen and work with us to get the end product the City wanted.

The City hired TranSystems Corporation as project manager and to manage the RFP process. TranSystems and the City of Long Beach saw the benefits of the best-value bid process and wrote the RFP accordingly. Long product life and low maintenance were important because the City wanted to avoid rebuilding again for as long as possible. The subs included the engineer of record, Moffatt & Nichol, the dock system engineer, Bellingham Marine Engineering, and the key construction sub, Manson Corporation for dredging and pile driving.

Bellingham Marine was selected as prime, in part for their design/build capabilities. “Not many contractors can perform that function on a project that includes both landside and waterside improvements,” said Steve Schmucker, Senior Project Manager at TranSystems. “Bellingham Marine could definitely handle it. It was a timely choice and made good sense financially.” 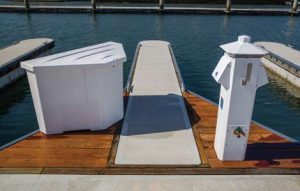 Work scheduling was critical. During the transition from smaller to larger slips. Bellingham Marine’s engineering staff maintained control of the design and determined feasibility, provided layout options, checked clearances in fairways and came up with work-arounds for environmental matters. Decision-making flexibility extended to the color of shoreside toilet facilities. When local homeowners saw the planned exterior color the rebelled. The team let them submit ideas and a color proposed by the homeowners was adopted.

The challenging aspect of dredging was where to dispose of sediment. Clean material can be barged out to sea and deposited in a controlled, unconfined area on the sea floor. If the material is contaminated or hazardous, options narrow. Drying the material and hauling it to a hazardous waste facility is costly.

Mercury found in some sediment was in all likelihood from nearby industrial run-off. Luckily for Alamitos Bay, the Port of Long Beach owned a Confined Disposal Facility (CDF) and agreed to take the material within a limited time window. The stops and starts put the City in danger of losing access to the CDF. Josh Burnham of Anchor QEA, the project’s environmental consultant, helped negotiate additional access to the CDF.

By 2015 the City realized it was in a position to sell revenue bonds to pay for the project. “Because the bonds were collateralized by revenues from the marina,” said Hallinan, “I had to sell my marina to investors through road shows with Morgan Stanley. Preparation took six months. A couple of investors actually came out to the marina and we took them on a tour to see the old and new docks. The quality of the new marina and the loyalty of the customer base were factors in our successful financing.”

The City originally thought it might be able to sell $30-40 million, but the entire offering ($114,015,000) sold out in half an hour. The City paid off previous loans leaving a budget of $49 million to complete in-water construction and $3 million for landside improvements.

A marine biologist and an ornithologist guided the City’s environmental compliance. A mitigation site was created in marine stadium to plant eel grass beds to compensate for dredging and construction losses. Migratory sea birds and nesting sites were monitored and protected. Starfish clinging to old docks were returned to the water.

No boat owner was without a temporary slip as new docks were being build. The closely bonded marina tenants came into the office to see if their temporary moorage could be near each other. They wanted to return to the new docks the same way. While there were complaints about the long wait, the feeling in the marina is sheer happiness. The tenants love the new docks and the neighborhood is better than ever.

Robert Wilkes writes about the marina industry from his home in Bellevue, WA, USA.