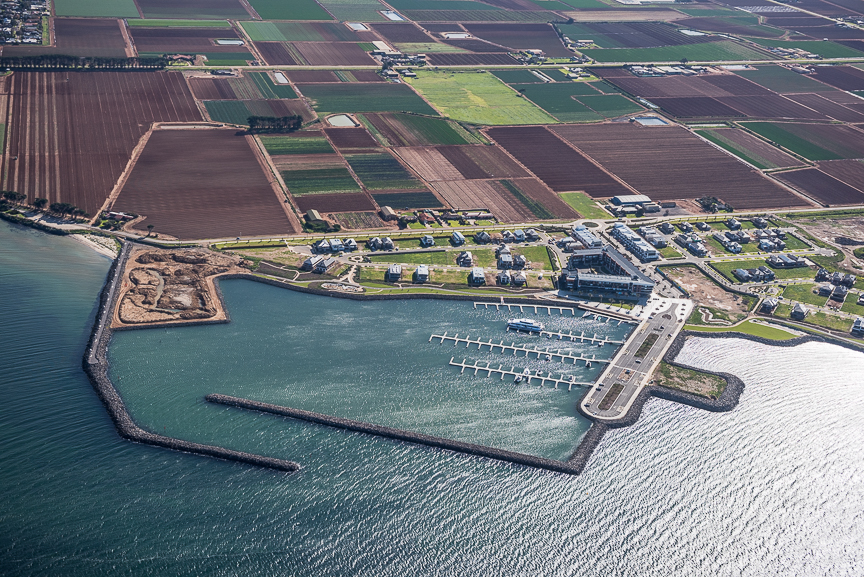 Following decades of planning two spectacular waterfront communities 1,000 km apart recently opened in Australia. Wyndham Harbour and Trinity Point are bold in scope and vision. Creating “something out of nothing” marina developments requires persistence, talent, and patient investors. Each is an example of how to build stunning new marina-based living communities on raw land and unimproved coastline.

Wyndham Harbour is located near the town of Werribee between Geelong and Melbourne. To understand the logic behind Wyndham Harbour one must take into account the phenomenal growth, cultural diversity and economic vibrancy of Melbourne. Located 39 km from Melbourne, Wyndham Harbour has taken advantage of the economic vibrancy of the city.

According to Australia’s largest newspaper, the Herald Sun, Melbourne (population 4 million) is the fastest growing city in Australia and has been voted the world’s Most Livable City for five years running. Built on the Yarra River at the northernmost reach of Port Phillip Bay, the city spread southeastward for a century and a half. West of the city, however, is lightly populated. There is some industry near the city and farming as one travels farther west.

The developers recognized that Melbourne was bursting at the seams, bogged in heavy traffic and constrained by a shortage of affordable housing. They saw an opportunity for both a new living community and a new marina. The new marina would enhance the boating experience for all of Port Phillip Bay.

Melbourne’s minister of planning has predicted 900,000 people, or 20% of Melbourne’s population, will be living west of the city by 2026. Wyndham Harbor is intentionally positioned to benefit from that growth as Melbourne inevitably expands westward.

Barry Brott of the ownership group said, “People have been talking about a safe harbour in the western part of Port Phillip Bay for at least forty years. Now, with the opening of our marina, it’s here.” Wyndham Harbour celebrated its opening in March of this year.

Brott continued, “We have been very thoughtful in our approach and have included a large team of excellent consultants to help us get it right. We’re trying to achieve a balance between the land development and the water. We’ve studied similar projects and many of them emphasize the boating over the land or land over the boating. We’ve taken a patient, balanced approach geared to get the most out of the bay.”

The marina is the first new bayside marina in Victoria since St. Kilda in 1969. The first phase of the marina was completed by Bellingham Marine Australia and deploys Unifloat concrete floating docks. Marc Carney, Bellingham’s sales manager for Southern Australia, said “The 150 berths from 10m to 20m built as phase one are now open, and management has the flexibility to change the slip mix in subsequent phases as the market develops. This includes larger slips or any new configuration they may need.”

The fuel dock is now under construction and the master plan includes an array of facilities and services, including dry stack and haul out capabilities. The Wyndham Harbour sea wall provides one of the most protected harbours in Australia and encompasses enough water space for as many as 1,000 berths.

Construction began in 2011 on 27ha of land and 47ha of seabed. Stage One includes 200 house lots, 100 apartments and 25 townhouses. The lots have the infrastructure ready for buyers to appoint their own builders. In addition to the 150 berth marina, there are two beaches, walking and biking trails and a Marina Square plaza. A further 130 land blocks and 130 apartments are also currently for sale off-the-plan. Home sites directly on the waterfront are premium because as large as Melbourne is, very few homes are actually on waterfront. Wyndham Harbour’s waterfront homes are a rare commodity on Port Phillip Bay.

Wyndham Harbour’s location is considered suburban, or perhaps at this early point exurban. Aspiring professionals early in their careers often choose to buy an affordable home outside the city and commute to town as many do all over the world. In Wyndham Harbor their commute may well be the most pleasant part of their day. A new passenger ferry into downtown Melbourne is in testing now and will soon begin regular service. Other potential buyers see Wyndham Harbour as a place to retire on water with their boat nearby or possibly as a second home.

At the present time, boating on Port Phillip Bay consists mostly of fishing and yacht racing. Wyndham Harbour offers a new cruising destination within a few hours’ motoring or sailing time from Melbourne. As Wyndham Harbor continues to add new businesses and is joined by other new marinas around Port Phillip Bay, new destinations will provide new dimensions to the Melbourne boating experience.

Johnson Property Group and its CEO Keith Johnson have spent more than a decade planning and developing a luxury planned community at Trinity Point. The site is located 88 minutes from Sydney on Lake Macquarie in New South Wales. The lake is a scenic destination with a number of picturesque towns, recreational areas, national parks, and beaches among its many attractions. Boaters enjoy the many coves and bays on the lake and can pass through the Swansea Channel to the ocean. From there they can coast down to Sydney Harbour or reach other east coast destinations.

Trinity Point is a master-planned living community and a premium resort destination. It features a 188-berth concrete floating dock marina also built by Bellingham Marine Australia with slips from 10m to 20m and some select slips to 30m. The marina offers one of the deepest marina basins on the lake with a minimum depth of 3m. Lake Macquarie’s Swansea Channel has recently undergone a $2.7 million dredging program further enhancing the lake’s boating appeal. The marina, boardwalk and sea baths (refreshing oceanside saltwater pools) are open to the public to open the lake shore to visitors.

When completed, Trinity Point will be home to a five-star Pullman Hotel, a 200-seat restaurant, a café and a 300-seat function room for conferences and meetings. Facilities will include a luxurious day spa, pool, and gymnasium, an infinity pool with waterfront cabanas, and retail outlets.

The residential side includes 189 building lots for sale to the public and 250 apartments to include permanent residential and short-stay units. With 23ha of prime waterfront, the development will become one of New South Wales largest mixed use projects.

Braden Johnson, Deputy Managing Director, said, “The project is designed to cater to a wide audience. Our market includes Sydney buyers looking to the future who need a place to get away for the weekend with the family without being too far out of Sydney. We expect to attract people from far and wide looking to retire within the next 10 years who want to get in early and capitalize on the opportunity to own property in Trinity Point.”

The group worked with leading architectural firm Squillace Architects to ensure each residential offering was designed to cater to buyer profiles at various stages of their life. “People are drawn to the site based on its gracious architecture, premium amenities and its location,” said Johnson. “Our site offers strolls along the boardwalk surrounding Trinity Point’s shoreline. One can stroll past the old sea baths being restored to their former glory. We are close to some of Australia’s most renowned beaches, such as Sand Islands, Caves Beach, and Redhead beach. We have national parks nearby and a number of fine restaurants in the vicinity.”

Each of these developments is anchored by a state-of-the-art marina. Imagine, and it’s difficult to imagine, that they were built without a marina at the heart of the project. The integration of land and sea would be lost. The distinctive, landmark quality of the enterprise would be lost and the project would lose its luster. While it’s true that marinas take time to plan, permit and build, they are indispensable. A developer cannot create a true waterfront community without one.

Each project team benefited from patience and careful planning based on the realities of their markets. Both developers took the long view and sought to optimize sites out-of-the-city but with enormous potential. Wyndham Harbor and Trinity Point are marina-community projects the owners can be proud of.

It’s hard to say if these Australian developers are onto something new, that building from scratch in places out of the city (but not too far out of the city) will be a trend. But it’s clear that cities all over the world present similar business cases as Melbourne and Sydney. Perhaps these Aussies are blazing a new trail for the next generation of marinas.