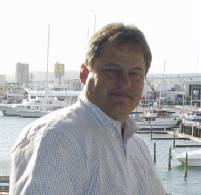 The Board of Directors of Bellingham Marine Industries has appointed J. Everett Babbitt as the sole President of Bellingham Marine. When Babbitt joined Bellingham in 1984 as a Northwest region sales rep, he brought with him 10 years of experience in the marine industry. In 1988, he accepted the position and responsibilities of General Manager of the Southwest Division in California. In 1992, he returned to Bellingham, Washington, where he formed and managed Bellingham’s Metal Systems Division.

Babbitt’s responsibilities within the company continued to expand when, in 1995, he supervised all four company divisions as Vice President of Operations, and, in 1998, he became the Executive Vice President. In 2001, he was promoted to Co-President and was responsible for operations, production, construction, accounting and all financial aspects of Bellingham Marine.

Now, as President, Babbitt is in charge of the overall performance of the five US and two international divisions of the company. “I look forward to supporting the extremely talented professionals who make up the team of Bellingham Marine. This is a unique company that has extraordinary opportunities to assume a leading role in our industry.”