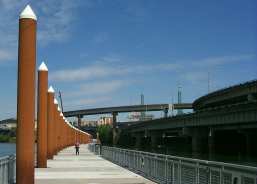 City planners in Portland, Oregon, wanted to bring people from all parts of the city together. To do this, they have ordered $35 million of renovations in four phases. The first, a 1,000′ floating walkway called Esplanade, was recently completed. The walkway is one of the longest floating spans in the nation and extends from Burnside Bridge to the Steel Bridge along the east bank of the Willamette River. This provides pedestrian access to the river and connects the east bank with the downtown area.

To prevent damage from strong currents and wakes, development specialists from Bellingham Marine supplied a concrete floating walkway. KPFF Consulting Engineers were the engineers of record on the project. In addition to the walkway, project highlights include handicapped-accessible gangways and an existing historic seawall which supports a 600′ cantilevered walkway.

Three upcoming phases of the renovation project include trail improvements from the Hawthorne Bridge to the Burnside Bridge, a public park and an art center.