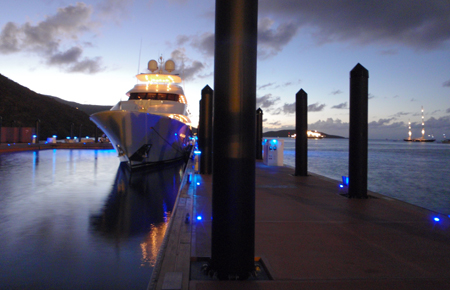 2011 brought with it the completion of a number of unique marina projects. Bellingham’s Best of 2011 list pays tribute to several such projects.

At the end of each year it’s nice to look back and reminisce about all that took place that year.  Time goes by like a blur and after a couple months it’s often hard to recall all that was actually accomplished over the years’ time.

Below are the projects that topped Bellingham Marine’s Best of 2011 list.

Best in Show:  Bellingham Marine started the year with the completion of an upscale mega yacht facility on the island of Virgin Gorda in the British Virgin Islands.  The project features all the latest and greatest in amenities and is a model of what’s to come in the future of marina design.  Geared to serve the industry’s largest boats, everything at the Yacht Club Costa Smeralda Marina is designed to cater to super yachts and the elite lifestyles of their owners.  Oversized polished bollards, extra wide docks with high freeboard, and mega power units command the attention of all who visit this world class facility.

Clay colored concrete floating docks finished with hardwood trim, recessed deck and underwater colored lighting, sleek back piles caped in black and stunning canvas covers rising high above the docks like sails showcase the marina’s sophistication and style.  On the cutting edge of marina design, Yacht Club Costa Smeralda is spurring a new expectation in the minds of captains and crew when it comes to marina design.

Best in Large facilities:  In July, Bellingham Marine completed one of the company’s largest projects to date – Cabrillo Way Marina, located in San Pedro, California. The marina fills a 39 acre deep water basin and provides the metropolitan Los Angeles area with 700 modern berths.  The marina features all the creature comforts boaters have come to appreciate including access to full utilities and in-slip sewage pumpout.

Construction of the marina included replacement of the facilities’ 520 existing slips plus an expansion of the basin to make room for 160 new slips. Designed to service its owners for 50 years, the docks at Cabrillo Way Marina represent the best in floating dock technology.

Best in Technical Design:  Designed by the Bellingham Marine team for use in an extreme climate, the docks for Alaska’s St. Paul Island Small Boat Harbor were used for the first time during the 2011 fishing season by St. Paul’s local fishing fleet.

The docks feature a heavy duty galvanized steel frame and a thick steel grated deck supported by specially designed heavy duty polyethylene tubs.  The dock system was engineered to accommodate heavy commercial use and the removal and storage of the docks at the end of each fishing season.  The winters at St. Paul are so harsh that no structure could survive the brutal storms and large icebergs that fill the harbor each winter, so they needed a solution that could be pulled out of the water each fall.

Recognized for excellence in design by the engineering world’s most prestigious association, American Society for Civil Engineers, St. Paul is a testament of Bellingham’s skill in designing and constructing highly specialized and sophisticated floating structures.

Best in Service: Recognized worldwide for its 5-star facilities and commitment to superior customer service, Marina at Keppel Bay celebrated the completion of the marina’s third and final phase of construction in early 2011.

Designed around the principle that in order to have a 5-star marina you need top of the line infrastructure, Bellingham Marine provided Marina at Keppel Bay with an engineered concrete dock system designed to meet the unique needs of Keppel’s site and its tenants.

Construction took place over the course of three years and three phases.  With the completion of the last phase the marina boasts 168 berths with the capacity to handle super yachts of up to 280 feet.

Best in Delivery:  Proving to be a model of efficiency, Bellingham Marine completed the reconstruction of Santa Cruz Harbor’s U-dock in less than six weeks – from receipt of materials and demolition of the existing pier at U-dock to installation and hand over.

A number of docks at Santa Cruz Harbor were badly damaged when a tsunami hit the mid-west coast of the United States.  The City of Santa Cruz wanted to get their docks back in operation as soon as possible.  Bellingham Marine worked with its engineering and construction teams to come up with a solution that would allow for the subassembly of critical components before the docks were shipped to the site.  This shaved several weeks off the duration of the project and allowed Bellingham to meet the city’s tight timeline.

All in all, it’s been a good year for Bellingham Marine.  The Company sends its sincere thanks and appreciation out to all they work with. “It’s been a tremendous honor to be a part of the many different projects that have kept us busy over this past year and look forward to what 2012 has to bring.”