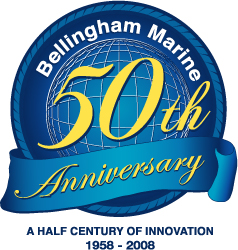 Bellingham Marine, perhaps the most recognizable name in concrete flotation and marina design will soon celebrate 50 years of success. Known for its site specific marina design utilizing its Unifloat® concrete floating dock system, Bellingham Marine’s docks and marinas are easily recognized by boating enthusiasts and professionals around the world.

The first Unifloat® docks were introduced to the industry in the 1950’s. First at Marina del Rey in California and later at Shilshole Bay Marina in Seattle, WA. The Unifloat® system revolutionized the industry and brought to the forefront the concept of concrete flotation. Although improvements too numerous to list have been made to the original Unifloat® design since its early days, the patented waler design is still considered by most experts to be the most reliable, low-cost, low-maintenance design for connecting float systems. Today, Unifloat® docks can be found in marinas throughout the world with more than 20 million square feet in service. From Australia, to Malaysia, to Europe, Japan, the United States, Mexico and Central America, Bellingham Marine continues to set the standard for floating dock systems.

The proven technology of the Unifloat® combined with Bellingham’s expertise in marina design has lead to a loyal following of marina professionals and boaters worldwide. “We approach each project as an opportunity to make it our best project,” said Everett Babbitt, President of Bellingham Marine. “We learn something from every project we take on. As we like to say, we are just completing our 50th year of Research & Development!”

From it’s beginnings in a small town just south of the Canadian border, Bellingham Marine has grown from a builders supply company manufacturing concrete docks into a comprehensive design/build marina construction company with nine manufacturing plants and a worldwide network of marina experts.