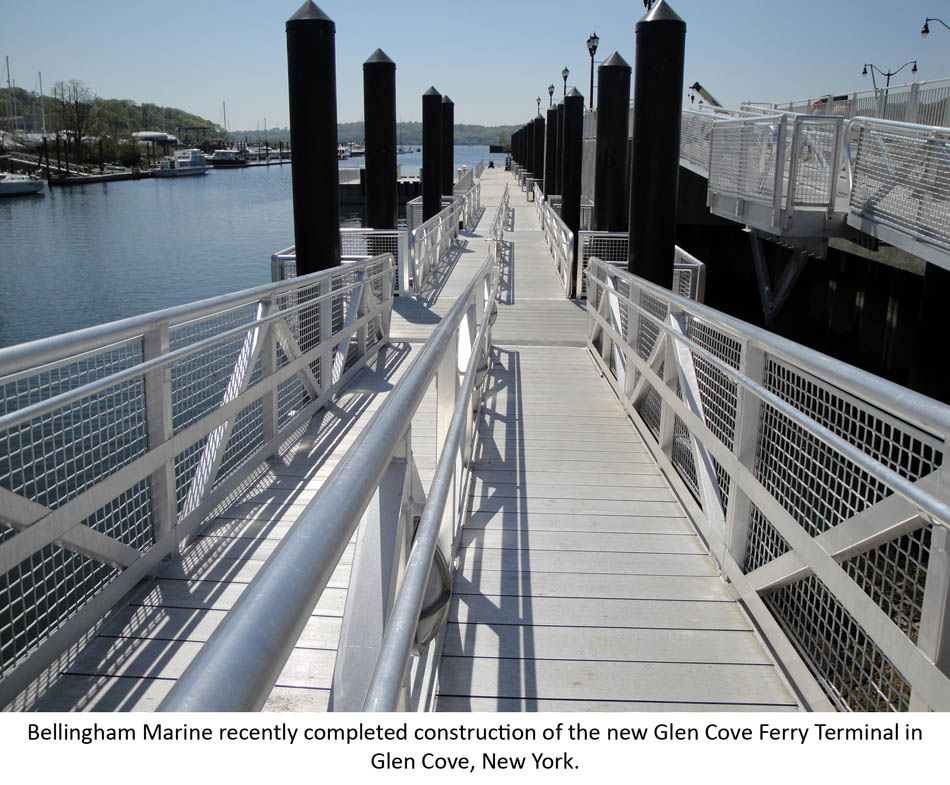 Bellingham Marine recently announced the completion of Glen Cove Ferry Terminal in Glen Cove, New York. The new floating ferry terminal is a story of perseverance and innovation. After 20 years in the making and several years of construction delays, the state-of-the-art terminal is complete and ready to welcome boats.

Designed to accommodate multiple ferries up to 100 feet in length and passenger loading and offloading, the terminal at Glen Cove offers a relatively unique design solution in ferry terminal construction. The terminal features a 15 foot wide by 375 foot long floating concrete dock that sits five feet above the water and a 31 foot by 30 foot match-cast floating loading platform. The massive concrete floats used for the project measure over 9 feet tall and are anchored by 20 inch steel pile recessed into the concrete platform.

An elaborate ramp and railing system as well as custom fender system, which allows the boats to pull in bow first, were also integrated into the floating structure. The fender system is composed of multiple 12” rubber fenders mounted to galvanized steel brackets attached to the side of the concrete floats. The specially designed system provides a well-protected landing for the ferries and accommodates easy loading and offloading.

“Integrating the design of the bow loading fender system into the floating structure was a challenge,” said Steve Noonan, General Manager of Bellingham Marine’s Northeast Division. “However, the team’s extensive marina design and construction experience enabled us to meet the challenge and create an impressive ferry terminal the City of Glen Cove will enjoy for years to come.”

In addition to the floating terminal, the project included work to increase the width of the channel, a new bulkhead, improved public access, a terminal building and parking facility. Chesterfield Associates from Westhampton Beach, NY was hired as the General Contractor. Bellingham Marine was responsible for the design and construction of the floating terminal. The success of the project is a testimony to the dedication of the many people who worked to make the project a reality. According to City officials, the new terminal lies on a portion of land that was among the most highly contaminated industrial areas in the state of New York. With the help of many supporters the site was completely remediated and opened up for commercial use.

The city plans to begin using the new terminal in 2013 to provide service between Glen Cove and key metropolitan centers in Long Island Sound including the city of Manhattan.