Canada’s newest marina, Milltown Marina, sits on the outskirts of downtown Vancouver, B.C. in a well-protected basin on the North Arm of the Frasier River. 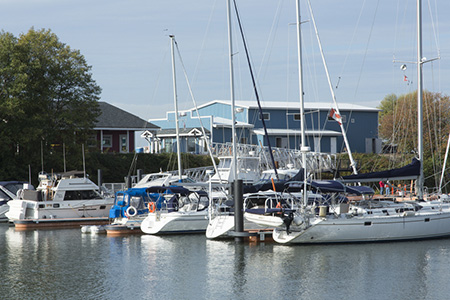 Milltown Marina is a great example of a modern, urban marina that was designed and built to provide the best value for the owner and the facility’s users.

The marina’s story is not that different from other Greenfield projects, and it’s actually the commonalities that it shares with other projects that makes it an interesting case study.  Milltown started out the way many new marina projects do with a vision for the site, then a concept design and finally a layout for the docks followed by an issuance of a Request for Proposal (RFP).

Like a growing number of Greenfield marina projects, the response to the RFP is where the Milltown project deviated from its original course.  The original plan was to get bids from dock builders to supply the docks that when assembled in the water by a general contractor would make up the configuration shown in the original drawing. The anchoring system would be supplied and installed by a third party and the utilities and accessory packages would be handled separately.  This approach was designed to cut out any middlemen and avoid extra markups.  In theory, the concept makes sense.  The problem is that the modern marina is a complex web of interconnected systems that is most often best approached as a single system by a marina builder who specializes in the design/build of marina systems and who can take advantage of economies of scale.  This is where the real savings happens.

In the RFP for Milltown, Bellingham Marine saw an opportunity to provide the owners of Milltown Marina a value engineered package.  This wasn’t the outcome the owners had anticipated from their RFP but keeping an open mind they allowed Bellingham to present their idea.

Milltown’s RFP came with a prescriptive dock layout and pile design.  When Bellingham reviewed the design they saw several places where the docks could be reconfigured to better utilize the water space. The original design also called for a high number of piles; by understanding the intricacies and strengths of their own dock system and pile design, Bellingham Marine could offer an alternative design that reduced the original pile count by more than 25%.  This translated in to a major cost savings for the owner.

The utilities were another area that Bellingham saw an opportunity to help the Milltown project.  Originally, the plan was to approach the utilities’ design as a separate component.  Bellingham was able to show the owners that by approaching the design of the docks and the utility systems as a package when getting bids, they could get a better feel for the actual cost of the project and could then start comparing bids apples to apples.

Bellingham Marine’s capabilities are somewhat unique in the industry in that the company performs its own electrical design in-house for the vast majority of its projects. Having done so for many years the company has become very efficient at creating electrical system designs that provide maximum value to their owners.

Milltown opened its doors in October 2013.  The marina’s wet slips cater to vessels 30’ to 80’ in length with a capacity for 220 vessels.  The docks are terracotta colored concrete floating docks with rounded finger ends.  Full utilities are provided at all slips.  The marina also includes a dry storage building for vessels under 30’ in length as well as a restaurant and club house.  For more information about Milltown Marina visit their website at www.milltownmarina.com or contact Bellingham Marine at bmi@bellingham-marine.com