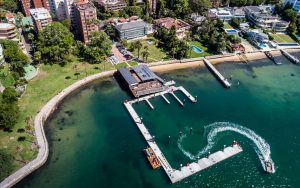 END_OF_DOCUMENT_TOKEN_TO_BE_REPLACED

C.M. Ferrer, the European licensee of Bellingham Marine, was awarded the ISO 9001 certification in recognition of its industry leading quality assurance program. 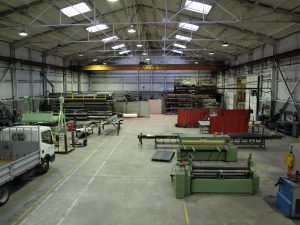 C.M. Ferrer, the European licensee of Bellingham Marine, was awarded the ISO 9001 certification in recognition of its industry leading quality assurance program.

Bellingham, Washington, USA – 30 May 2018 – International marina builder, Bellingham Marine holds itself and its licensees to very high standards. The company is pleased to congratulate its European licensee, C.M. Ferrer, on obtaining their ISO 9001 : 2015 certification. The Spanish plant has been recognized for its industry leading quality assurance program by a third party certification body.

ISO certification is a way for developers and marina owners to be sure they are working with a quality manufacturer, as verified by a third party. Certification requires an in-depth quality assurance plan and thorough inspections of the plant and its operations.

“At Bellingham Marine we’re proud of our commitment to quality work and processes,” said Everett Babbitt, president and CEO of Bellingham Marine. “Today’s news of C.M. Ferrer’s ISO certification recognizes the efforts of the entire team.”

END_OF_DOCUMENT_TOKEN_TO_BE_REPLACED

Bellingham Marine representatives travel to the U.S. to see what leading marina developers and designers are building. The goal – spread good ideas and foster innovative thinking across Australasia. 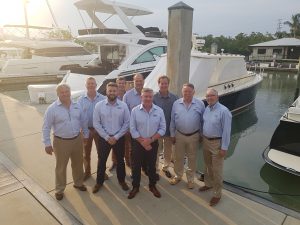 A group of 30 senior industry leaders from around the globe met in the U.S. to ensure customers worldwide have access to the best and most innovative marina design available.

Brisbane, QLD, Australia – 17 May 2018 – Local marina expert, Bellingham Marine, is fueling competitiveness and innovation with a recent tour of prominent U.S. marinas. Management from the company’s Australia, China and New Zealand divisions travelled to the U.S. to tour some of the States’ top marina properties. During their time in the U.S., the team also met with a group of 30 senior industry leaders from around the world.

Bellingham CEO and President, Everett Babbitt, says, “The future of the industry depends on nurturing international collaboration. We want to ensure customers worldwide have access to the latest and greatest in marina design.”

“Collaboration has the power to spark innovation. Everyone brings unique knowledge and skills to the table,” shared John Spragg, Bellingham Marine President of Australasia and the Middle East. “Connecting our international teams ensures cross-pollination of the latest trends and developments.”

END_OF_DOCUMENT_TOKEN_TO_BE_REPLACED

The opening of the new marina marks a significant milestone for the region, which moved mountains (or an island rather) to make it happen.

Lake Taupo, New Zealand – 6 March 2018 – Situated on the caldera of a supervolcano, you will find the largest freshwater lake in New Zealand. A trout fishing mecca, Lake Taupo quickly became a popular holiday spot. Tourists come from near and far to enjoy the warm, clear waters and natural volcanic hot springs. 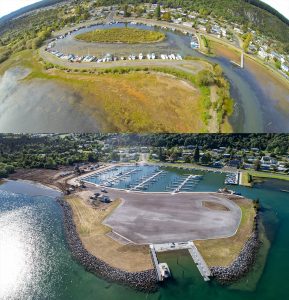 Motuoapa Marina was constructed over 50 years ago on the south shore of Lake Taupo. The village of Motuoapa was just a small settlement at the time. Catering to small fishing vessels, engineers designed the marina with a circular basin. Featuring a large island in the middle, short finger piers rimmed the edge. When the marina was given the go ahead for redevelopment in 2016, designers knew the island had to go.

How exactly does one remove an entire island? The first step was to bring in 1-tonne bags of gravel to build a dam at the marina’s entrance. Once the access was blocked, contractors began pumping water out of the basin.

The water level was taken down to  ½ meter deep. At that time, crews brought in dredging equipment and began to dismantle the island. The soil from the island was then used to reclaim land at the northern end of the marina. This created several acres to be used as picnic, recreation and parking areas for guests.

“It’s an exciting time for our community,” remarked Deputy Harbourmaster Toni Maulder. “The project was complex but the new marina was well worth the wait. It allows boats to be berthed safely in deeper, cleaner water with modern compliant facilities for berth holders and the general public to enjoy.”

END_OF_DOCUMENT_TOKEN_TO_BE_REPLACED 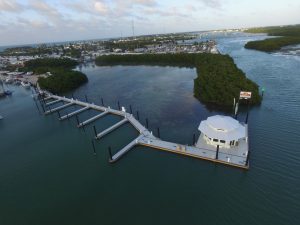