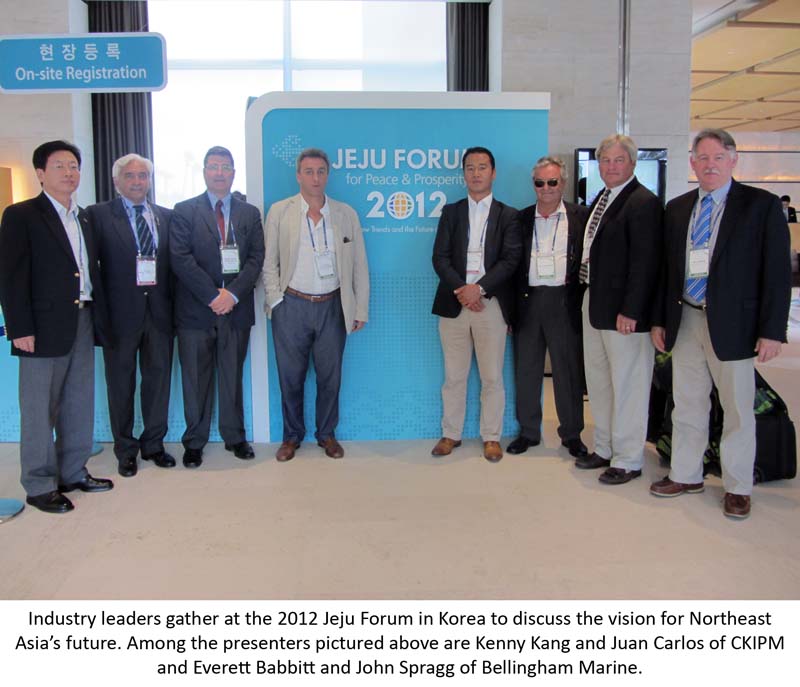 On June 2nd, CKIPM CEO Mr. Kenny Kang and colleague Juan Carlos teamed up with Everett Babbitt, CEO of Bellingham Marine and John Spragg, General Manager of Bellingham Marine Australasia to give a presentation to leading Asian policy makers and practitioners at the 2012 Jeju Forum for Peace & Prosperity. The team’s presentation dealt with strategies for the Jeju Marine leisure industry focusing on the development and management of marinas.

The annual Jeju Forum is one of Asia’s major venue’s for political, cultural and academic leaders including incumbent and former heads of government to exchange opinions and discuss the vision for Northeast Asia’s future and to promote multilateral cooperation in the region. This year’s event was held May 31st – June 2nd on Jeju Island in Korea.

On the same trip, Mr. Babbitt traveled to Hwaseong City where he was welcomed by organizers of the Korean International Boat Show. Mr. Babbitt was invited to sit on a panel of marina development experts to discuss current industry issues.

“It was an honor to be asked to speak at these two events,” said Babbitt. “Korea has ambitious plans for the development of their leisure boating industry and is positioning itself to be a major player in the market.”

According to boat show organizers, the serious promotion of leisure boating in Korea was started in 2008 by Governor Kim Moon-Soo with the introduction of the Korea International Boat Show and Marine Festival in Jeonggok Marina in Gyeonggi Province.