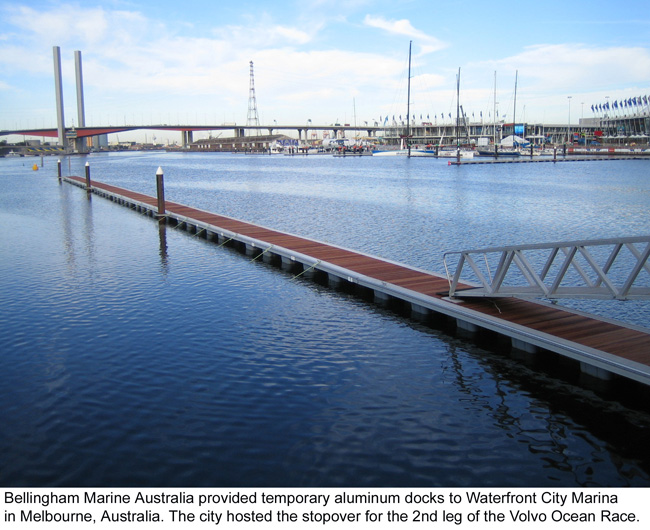 The Volvo Ocean Race is the world’s premier ocean race and features nine offshore legs, starting in Vigo, Spain and concluding in Gothenburg, Sweden. The Melbourne stopover kicked off a month-long party in the Docklands. There was live music, an in-port race, a special food and wine event and the BIA Summer Boat Show.

Installation of the aluminum docks had to move quickly and the components had to provide stable walkways and secure moorage for race participants. The calm basin of the Docklands provided the perfect setting for the premier of the Unideck system. Like all aluminum docks, the Unideck performs best in calm areas.

Bellingham Marine General Manager John Spragg believed the launch of the new aluminum Unideck system was a huge success, “We were happy to see how well the system handled the boat wakes and large crowds.” Graeme Ainley, past president of Yachting Australia and one of the site’s co-coordinators, said he was also very pleased with Bellingham’s Unideck system. “It performed extremely well and appears to be far more stable than other aluminum systems.”

Once the seven teams were off on the third leg of the race, and the festivities ended, the temporary system was removed. Over 200 meters of it were sent to New Zealand to serve as part of the in-water display at the Auckland Boat Show. The remainder stayed in Melbourne, where part of it will be used for the Melbourne Commonwealth Games.