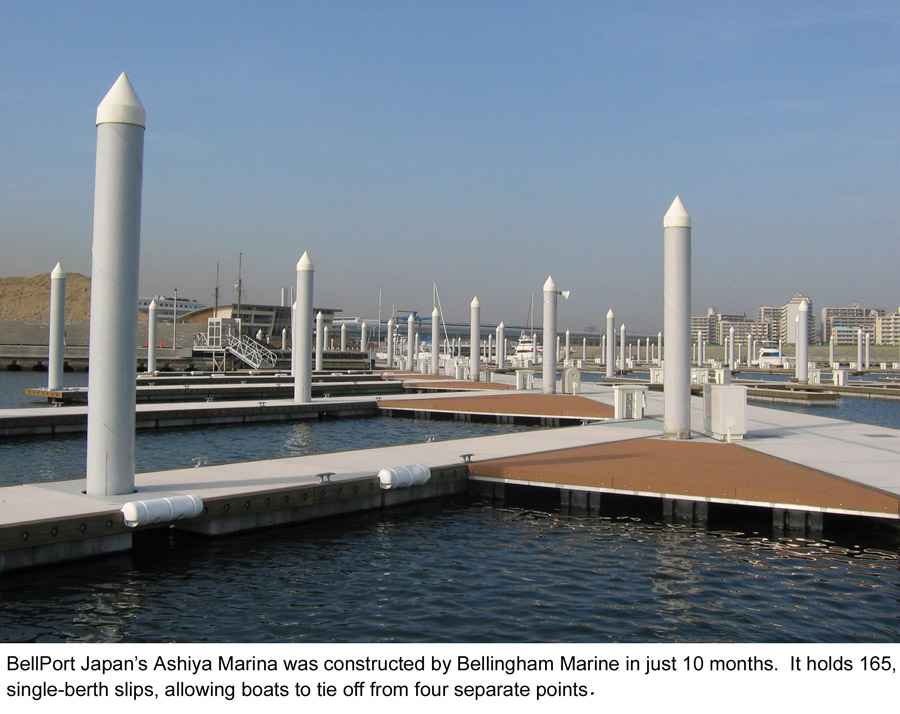 Located between Osaka and Kobe, BellPort Japan’s modern Ashiya Marina is rapidly becoming the gateway to Hyogo Prefecture’s affluent city of Ashiya. To ensure that the marina met BellPort’s high standards, Bellingham Marine was chosen for the job.

The land comprising the marina was originally a reclaimed area, which was shaped into a basin to form a man-made shelter years ago. Designs for the marina were started in 1998, and in 2003, permission was granted to begin construction. Bellingham’s most difficult hurdle was to overcome the completion date, since Hyogo Prefecture only allowed 10 months to finish the project.

Plans for the marina consisted of 165 single-berth slips ranging from 9.7 m to 30.5 m. To protect against Japan’s frequent typhoons, BMI’s Unifloat system was utilized. With this single-berth system, a finger pontoon was located on each side of the slip, which allows owners to tie their boats from four points for maximum protection from wind and waves. The Unifloat system also acts as a wave attenuator to provide safety from any unexpected surges. The slips are equipped with 30A/125VAC and 50A/250VAC electrical service, plus water hook-ups. Dock boxes and dock carts are included, and there is even a fuel dock, a pump-out station and a fish cleaning station located nearby. Electric carts are available to transport boatowners and their guests between the parking lot and their boats.

In addition to its members’ slips, Ashiya Marina also provides a 70.1-m x 125-m, L-shaped visitor dock for transient boaters. There is also a 90 m-long, straight visitor dock located in front of the clubhouse that will convert to a regular finger dock when the marina fills to capacity. Bellingham Marine’s attention to planning and construction is evident in every detail of the Ashiya Marina project. Joe Ueberroth, co-chairman of the BellPort Group in Newport Beach, California, said, “BellPort’s five-star approach to hospitality in the boating industry really comes shining through in this marina.”