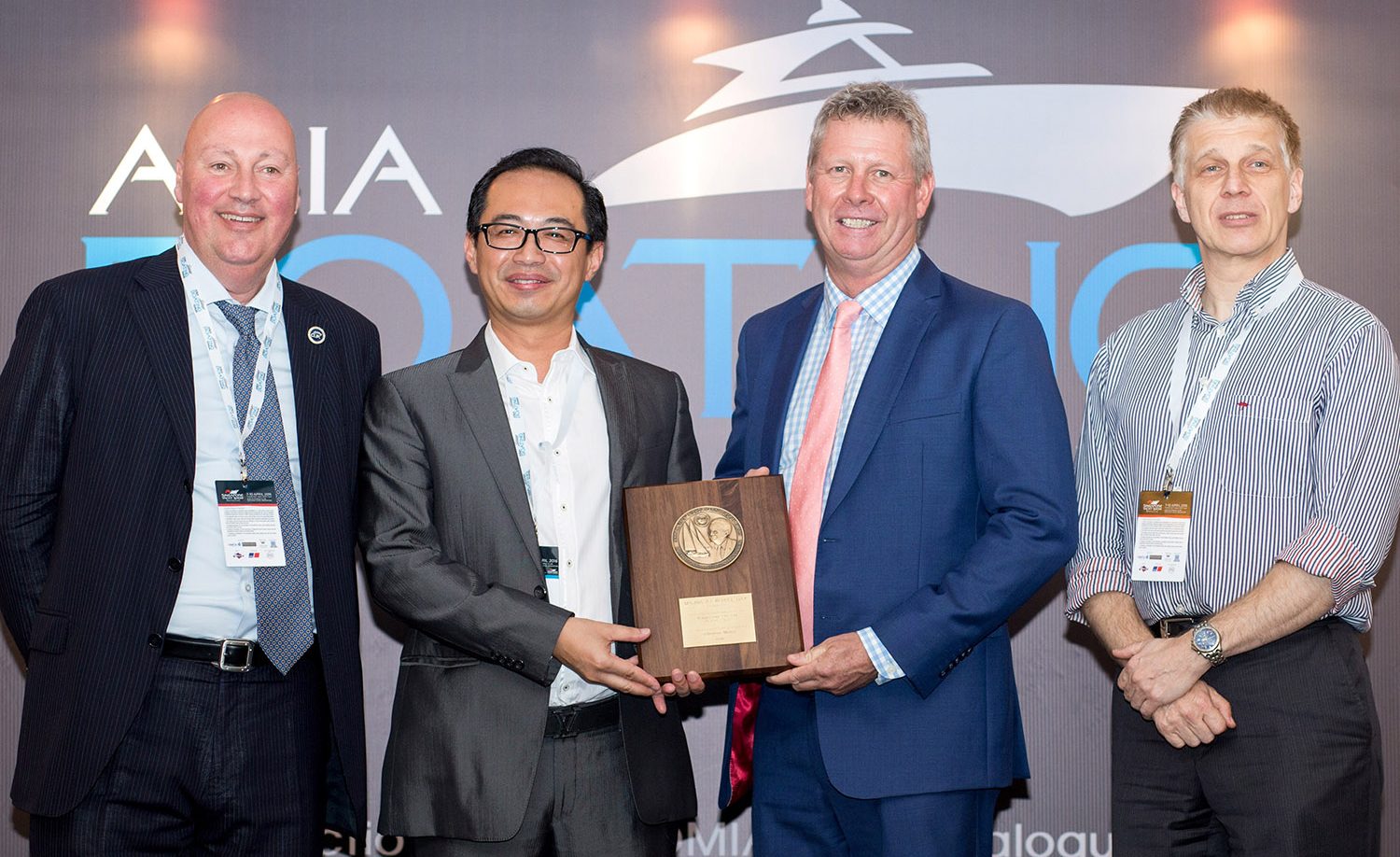 Awarded by The World Association for Waterborne Transport Infrastructure (PIANC), the accolade recognises excellence in the design, functionality, sustainability and aesthetics of modern recreational boating facilities.

Singapore, 8 April 2016 – Marina at Keppel Bay, designed by world renowned marina builder, Bellingham Marine, has become the first marina in Asia to be conferred the Marina Excellence Design Jack Nichol Award by The World Association for Waterborne Transport Infrastructure (PIANC), beating other international marinas from Turkey, Croatia and Italy to clinch the title. The award was presented today in a ceremony held at the Asia Boating Forum 2016.

“It’s an honour for one of our projects to be presented with PIANC’s prestigious Marina Design Jack Nichol Award,” remarked Mr Everett Babbitt, President and CEO of Bellingham Marine. “I can think of no greater accolade for our company than to be affiliated with an award that pays tribute to the late Jack Nichol and his work in the marina industry.”

“We are heartened that our efforts have garnered Marina at Keppel Bay international recognition. This award will spur us on in our journey towards achieving even higher standards in the Marina’s functionality and environmental sustainability for all our stakeholders, as well as the wider yachting community.”

The internationally-recognised Marina Excellence Design Award is administered by PIANC’s Recreational Navigation Commission (RecCom) and is evaluated by a judging committee which includes the International Council of Marine Industry Associations (ICOMIA) members.

Dr. Eng. Elio Ciralli, Chairman of PIANC RecCom, said, “Our Commission unanimously decided that Marina at Keppel Bay, which embodies excellence in design under functionality, sustainability and aesthetics points of view, to be the winner of the Marina Excellence Design Jack Nichol Award 2016.”

“It takes appreciation for the environment and a thorough understanding of the engineering requirements to ensure that a marina is properly planned, sited, laid out, protected and built – all of which are embodied by Marina at Keppel Bay.”

“The Marina’s comprehensive sustainability program is a fine example to the industry on how a well-designed and operated marina can have a strongly mitigated impact on its surrounding environment. Marina at Keppel Bay embodies principles to create a safe, sustainable, and pleasant place for boats and people – a truly enriching waterfront. The support for applying these principles is the main goal of PIANC RecCom.”

Setting new standards in marina construction and services, Marina at Keppel Bay’s state-of-the-art floating concrete pontoon system, designed and built by Bellingham Marine, can accommodate 168 yachts, including superyachts of up to 86 metres inside the Marina.

Mr. Trevor Fong added, “We are proud to have partners such as Bellingham Marine who have provided Marina at Keppel Bay strong support and expertise in building and designing a world-class pontoon system. The quality and spacious pontoon infrastructure has contributed to the Marina becoming a much sought-after berthing facility in Singapore.”

The award ceremony will also be held in Europe on 18 May 2016 during PIANC’s Annual General Assembly in Bruges, Belgium, in the presence of delegates representing more than 40 countries.

PIANC, the World Association for Waterborne Transport Infrastructure, is a non-political and non-profit organisation where professionals around the world join forces to provide expert advice on cost-effective, reliable and sustainable infrastructures to facilitate the growth of waterborne transport.

Established in 1885, PIANC continues to be the leading partner for government and private sector in the design, development and maintenance of ports, waterways and coastal areas. PIANC brings together the best international experts on technical, economic and environmental issues pertaining to waterborne transport infrastructures. Members include national governments and public authorities, corporations and interested individuals.

The PIANC Marina Excellence Design Jack Nichol Award was created in 2002 in memory of the late Jack Nichol, well-respected marina designer. The purpose of the Award is to recognise excellence in the design of modern recreational boating facilities around the world.

About Marina at Keppel Bay

Nestled on the historic Keppel Island, the award-winning Marina at Keppel Bay is the centrepiece of the premier Keppel Bay waterfront precinct – the only residential development in Singapore to have its own world-class marina on its very own private island.

The multi-award winning Marina at Keppel Bay is the preferred destination for international luxury yachts and water playground for the privileged. Set amidst beautifully landscaped grounds, the Marina enjoys proximity to the city centre and is in the necklace of entertainment hotspots. Featuring world-class berthing facilities with state-of-the-art concrete pontoons for 168 yachts, the Marina can accommodate yachts up to 86 metres in size inside the marina, while the berth alongside Keppel Island Plaza can accommodate megayachts up to 200 metres.

Within the Marina are exceptional dining and entertainment selections, exclusive waterfront venues, as well as a fleet of luxury yachts for private and corporate charters. The highly-acclaimed Keppel Bay Sailing Academy, an integral part of Marina at Keppel Bay, is the first sailing academy in Singapore offering sailing courses accredited by the UK-based Royal Yachting Association.

Bellingham Marine is the world’s leading marina design-build construction company which specialises in the design and manufacturing of floating dock, floating platform and floating wave attenuation systems for marinas worldwide. The company also produces dry storage systems for the upland storage of boats.