Incredible surroundings, increased economic wealth, and a safe and secure social environment make South Korea an intriguing market for the boating and marina industries. During the last decade, a great deal of effort has been placed by the government as well as private investors on improving the region’s boating infrastructure. 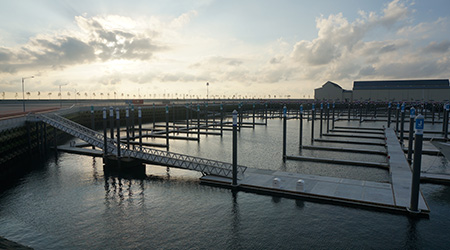 State-of-the-art concrete docks at Wangsan Marina in Incheon, South Korea, are setting a new standard for marina development in the region.

However, the country’s weak sailing culture and lack of experience in the construction and management of modern boating facilities has been a major hurdle in moving the industry forward at a faster rate. Albeit slow, progress is coming. The opening of Wangsan Marina, a contemporary boating facility in Incheon, South Korea, is opening the door to boating for many Koreans who did not have the opportunity before. Prior to the opening of Wangsan, there were no large scale marinas in or around Seoul’s major metropolitan area. With 266 moorings and a dock facility on par with the world’s most modern marinas, Wangsan is expected to have a major impact on the market and be a key force in setting a new standard for boating facilities in South Korea.

The concept for Wangsan Marina was to build a start-of-the-art competitive sailing venue for the 2014 Asian Games that could later serve as a public marina with amenities and services that would cater to domestic as well as international boaters.

Wangsan’s master plan calls for the development of a mixed use space that would include hospitality, retail, housing and other entertainment businesses to create a marina orientated destination within the context of the planned Yongyu-Muui Tourism Complex.

After more than two years of construction, Wangsan Marina opened in October 2014, just in time to greet the sailing teams competing in the 2014 Asian Games. Developers are now in the process of setting up the infrastructure and management systems needed to establish and operate the marina as a public boating facility. Work on Wangsan’s upland components is still in the planning stages.

Located in the yellow sea, between the Korean Peninsula and China, Wangsan is just an hour’s drive outside the city of Seoul. The site experiences 10 meter tides and strong currents. The main breakwater at Wangsan was placed parallel to the shoreline with openings on both sides to help the flow of water, which flows around 3 to 4 knots when changing from high to low tide.

The extreme tidal range and heavy current at the site combined with the vision for the marina as a destination for yachts up to 156 feet required a heavy duty pontoon system that was durable, stable and technologically advanced. The dock and piling system had to be custom engineered to meet the unique performance and loading specifications of the project.

The pontoons for the Wangsan project were designed and engineered by Bellingham Marine’s dock system engineering team in Australia. The float modules were manufactured by CKIPM, Bellingham’s Korean partner, at their facility just south of Seoul. All components for the marina’s pontoons were transported by barge via the Guimpo canal to the site. Installation of the floating docks began in February 2014 and was completed by October.

From a cultural point of view, Asiatic culture in general and Koreans in particular, have historically lived under a straight working culture, where most of the population had very limited free time. With increasing economic wealth the culture is changing. Interest in social activities such as golf, hiking, camping, and of course boating is starting to grow.