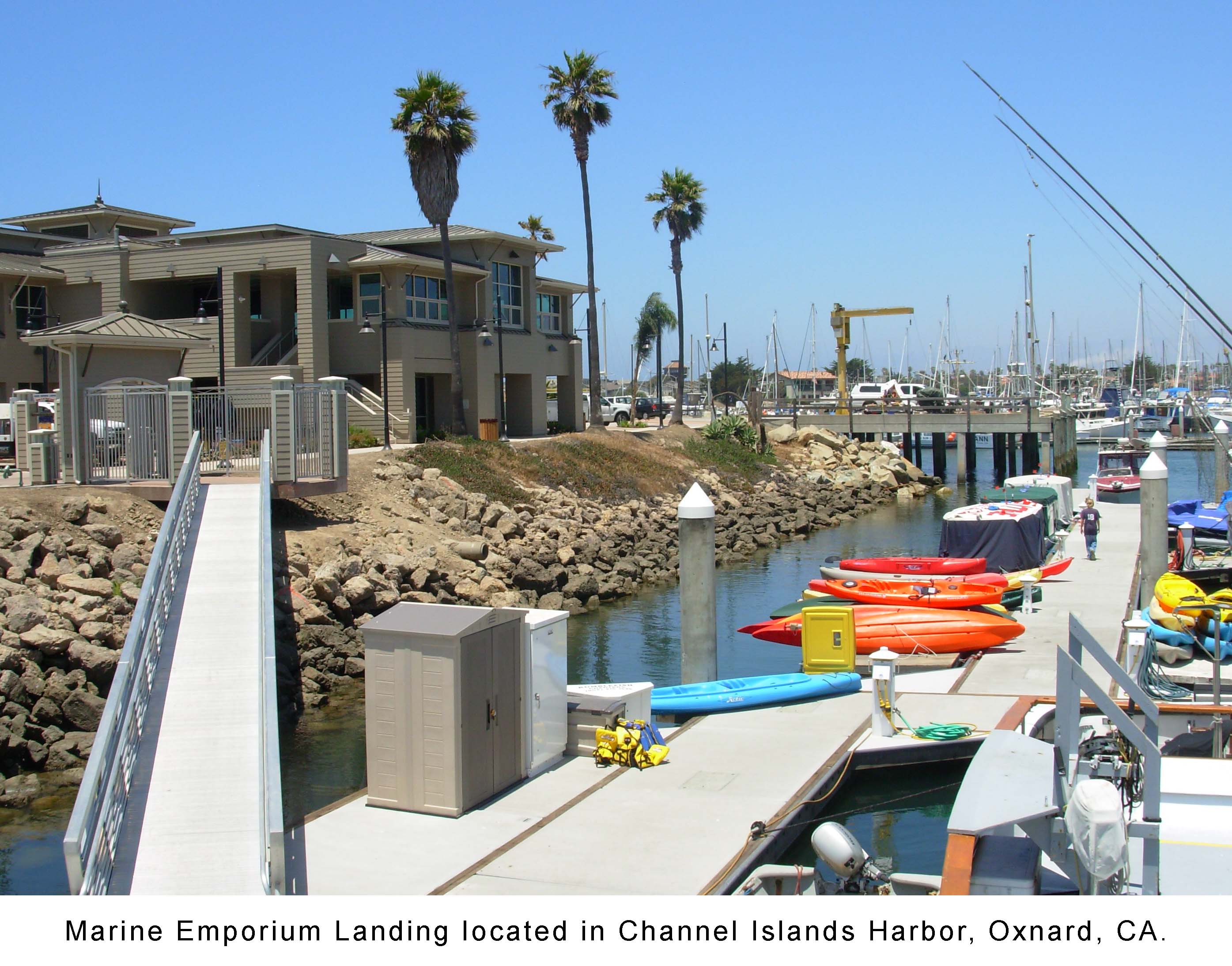 A community wide effort is underway in Channel Islands Harbor, Oxnard, California. Marina operators and landside business owners dedicated to restoring the harbor’s infrastructure are working diligently to bring improvements to fruition. Owner, Steve Buenger of Marine Emporium Landing is investing over $10 million in improvements to his visitor serving retail center. The first phase of Construction, commenced in 2007, will be complete as of July 2008. This includes replacement of both the 34 year old dock system and the shoreside buildings.

One of the Landing’s two buildings burned down in October of 2005. Having been an active lessee within the Channel Islands Harbor for decades, Buenger was determined to rebuild. Development of a third building, approved long ago in the City’s Public Works Plan for the Center, was added to the project. “Since we would be engaged in the complex administrative process to permit the rebuild, it made sense to do it all at once,” said Semones, Project Manager for Marine Emporium Landing, LLC.

The 34 year old wood docks were also in need of replacement. “The design was a team effort. Bellingham Marine and URS Cash and Associates worked with us to optimize the use of our site and to build a marine facility that was beautiful as well as functional,” remarked Semones. Feedback on the completed rebuild has been overwhelmingly positive. “Our tenants had no idea it could look this good.”

The site was permitted for a 65’ gangway. An 80’ gangway would have placed the docks further out into the channel and outside the lease hold. According to Semones, the option to use a 65’ gangway was a critical element in the construction process. “Compact dock design and efficient use of space was also important; Bellingham Marine worked with us to make the most of the area within our lease hold, and to meet the safety needs of visitors to our facility, including bringing the marina within ADA standards,” said Semones.

The facility at Marine Emporium Landing utilizes Unifloat docks and provides commercial space for water oriented services. Slips are 80’ to 100’ with a few 65’ slips. Docks are serviced with power, water and fire safety equipment. Space within the facility is leased to several sportfishing charter companies, an 87’ dinner cruise paddle wheeler, boat brokers, and an electric boat and kayak rental company.

Channel Islands Harbor has over 2,000 boat slips, several boat yards and a strong boat-centric philosophy. The goal of the Harbor Department and local businesses is to rebuild the harbor into a thriving visitor and local serving recreational destination concentrated on the community’s strong boating culture. According to an article which ran in the Ventura County Star in July 2007, over the next five years nearly $200 million in improvements will be made to the Harbor’s land side businesses with additional funds going to improve the Harbor’s marinas.