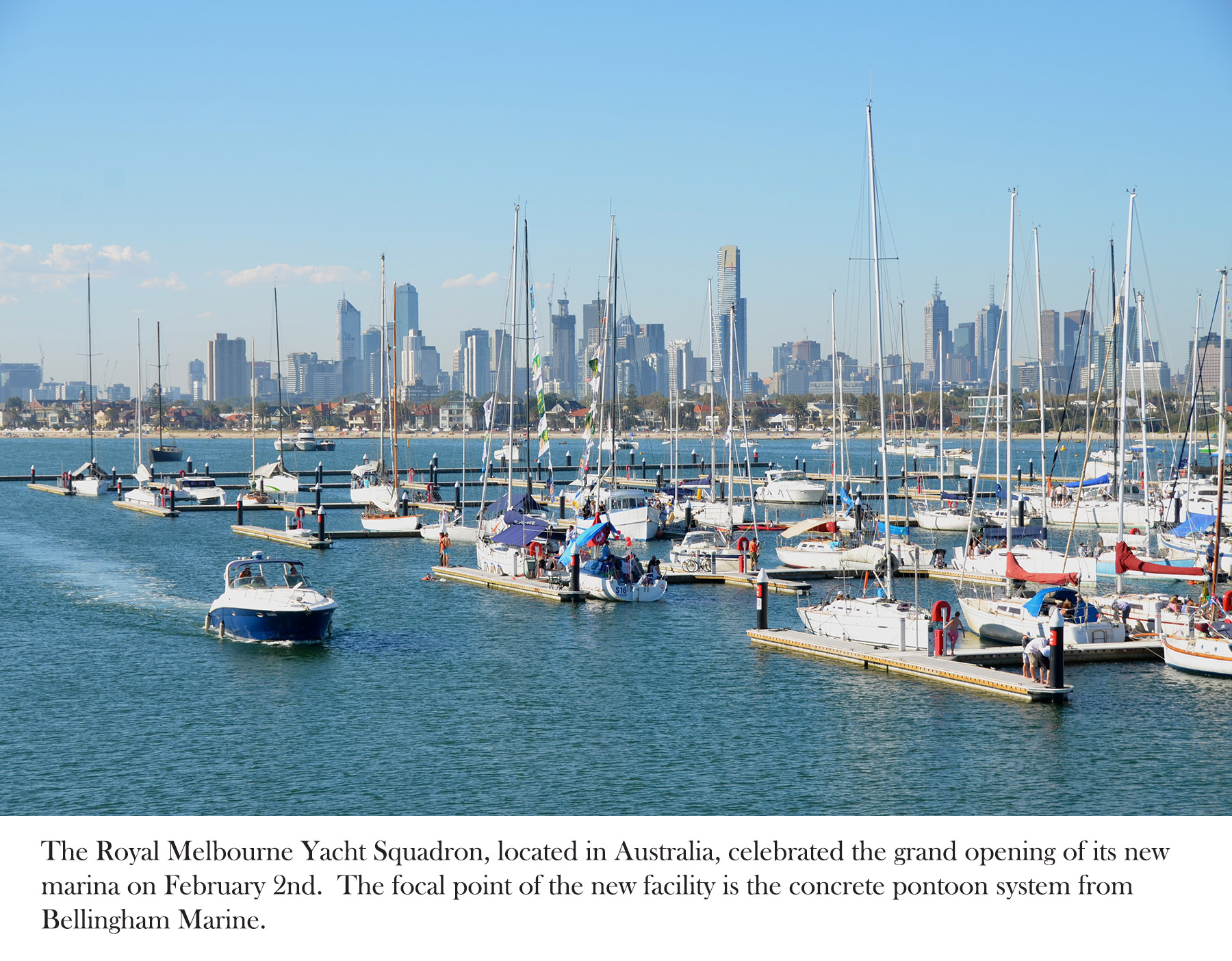 On February 2nd Bellingham Marine, worldwide marina builder, and the Melbourne boating community celebrated the opening of the Royal Melbourne Yacht Squadron’s (RMYS) new marina.  Bellingham Marine was contracted by the club in February 2013 to build a new state of the art 250-berth floating marina facility to replace the club’s existing dilapidated timber marina, which will subsequently be removed by RMYS. Concurrently, the club engaged Fitzgerald Constructions to extend the northern groin and southern rock breakwater.

For over ten years, the Royal Melbourne Yacht Squadron worked with various state and local government agencies on the development of a safer boating harbour and new marina facilities.  In January 2014, the club’s persistence and hard work paid off when Bellingham Marine announced the completion of the project.

The club’s new facilities, located at St. Kilda Harbour, includes 250-berths connected by over 1km of floating walkways all protected by an upgraded breakwater and new 140m long floating wave attenuator. Also installed by Bellingham Marine, as part of a separate contract, were 30m of gangway and a dedicated landing pontoon for shared public access.

The marina is accessed via one of nine security controlled access gates and gangways and has capacity for boats from 10 meters to 23 meters in length.  All berths are fitted with their own power and water supply via Marine Technologies’ Sterling and Platinum model pedestals. A full marine sanitation and pumpout system manufactured by Keco and supplied by Marine Technologies was also installed.

Situated at the center of the St. Kilda’s foreshore precinct, the St. Kilda pier, kiosk pavilion and rock breakwater have been an iconic destination for Melburnians since the 1950’s when the harbour was first formed as the headquarters for the sailing events during the Melbourne 1956 Olympic Games.

The grand opening of the RMYS new marina included a party with live music, an aerobatics display and widespread praise for the quality and functionality of the new facility. “Bellingham has been a delight to work with,” said Club Commodore, Linda Goldsmith, “They were able to work collaboratively with other contractors within the confines of the St Kilda Harbour and were informative and responsive to the Squadron’s requests. Issues that arose were dealt with calmly and responsibly. We are very pleased with the quality outcome and we have received from our members overwhelming praise regarding the new marina.”