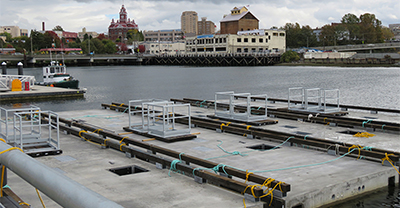 Richmond, BC, Canada – 9 June 2017 – On a rainy Thursday morning along the pier next to Steveston Landing, vendors peddle prawns, halibut and enormous Dungeness crabs. Visitors buzz about the public fish sales float, searching for the coveted spot prawns that are only available six weeks out of the year. The quaint little town, located in the southwest area of Richmond in British Columbia, makes you feel like you are stepping into the past. However, one step on the enormous new concrete floats holding the entire market up will remind you that times have changed. Bellingham Marine engineered a proprietary method for lifting the 80-ton Steveston Harbour floats, saving both time and money for the client.

Steveston Harbour is one of Canada’s  largest commercial fishing hubs, situated on the south arm of the Fraser River. The fishing dock has been open to the public since 1895 and was in serious need of repairs.

Bellingham Marine was awarded the contract by the Steveston Harbour Authority in March of 2016. The agreement included the manufacture and supply of 20 float modules, each of which:

They were in need of an economical, custom solution to replace the floats, and due to the massive size requirements that was a tall order to fill. Many companies placed bids to build the modules, but Bellingham Marine was the only one able to come up with a cost-effective way to deliver.

The floats were poured at Bellingham’s casting site in Bellingham, Washington. The advantage of this location is the direct water access, so there would be no bridges to cross or roadways with weight restrictions to traverse. The team quickly realized that the 300-ton crane that was initially planned for launching wasn’t going to work. Bringing in a larger crane would have run the project over budget, something Steveston couldn’t allow.

Bellingham Marine was able to engineer a customized proprietary equipment setup that allowed the floats to be lifted and loaded into the water without the use of a crane. The floats were towed to
Steveston Harbour by tugboat, where they were to be installed.

“The savings we were able to create for the Harbour Authority with this new way of handling large floats made the project financially feasible,” said Rob Rasmussen, General Manager for Bellingham Marine’s NW division.

“We were able to cast the modules in our plant, which provides the greatest level of control over product quality, and deliver to Steveston Harbour in a very cost effective way.”

The public fish sales float officially opened on May 11, 2017, although some parts are still closed to the public while power and water services are being run. Once the dock is fully operational, the Harbour will hold a grand opening ceremony to celebrate the milestone.

Want to know how we’ve made the handling and transport of oversized floats more economical? We can help with marinas of any size or shape, contact us to explore your options!