Perseverance, Determination and a Passion for all Things Boating 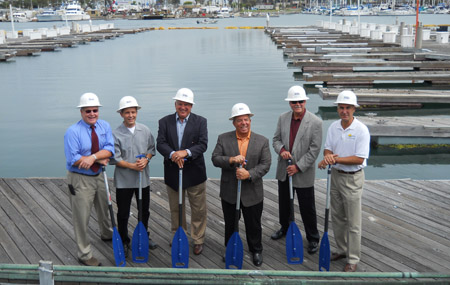 A groundbreaking ceremony was held at Alamitos Bay Marina on September 17, 2011.

If you’ve ever been involved in a laborious permitting and funding process you know all too well the feeling of victory and the heavy sigh of relief that comes once you receive your final OK to proceed. You’ll also know that without an iron will and a true passion for what you’re doing you’ll likely be eaten alive.

Anyone who’s spent much time at all with Mark Sandoval, Long Beach Marine Bureau Manager knows he’s a man of integrity and determination. After 10 years of planning and three years of delays, Sandoval received his final OK from Long Beach City Council to move forward with the first phase of his planned $90 million dollar renovation of Alamitos Bay Marina in Long Beach, CA.

The entire project includes dock replacement in basins 1 – 7, restroom renovations and parking lot upgrades. Over the course of the project, 1,967 slips will be replaced with 1,646 slips – the majority of the slips lost will be in the 20’ – 25’ range.

Under the leadership of Bellingham Marine, who was awarded the design/build contract for the job in 2008, work will begin in Basin 4 then proceed on a phased schedule as funding allows. On September 12th, Bellingham started the process of removing the marina’s wooden docks from Basin 4, which were built in the 50’s. The docks will be replaced with concrete floating docks. Additional work in the basin will include dredge work, replacement of all piles, parking lot, utility, and landscape upgrades and a new restroom. Reconstruction of basin 4 is expected to be completed in March 2012.

Depending on funding, the entire project is scheduled for completion September 2015. The goal is to put all monies received from this point forward towards replacement of the docks – according to Sandoval that is where the critical need is.

“To say there have been numerous hurdles to get to this point would be an understatement,” said Jim Puder, General Manager of Bellingham Marine’s SW Division. “I’m sure there are more to come but it sure feels good to be moving forward.”