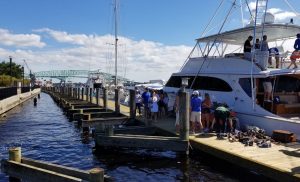 With roughly 600 people needing the docks for game day, this posed a huge problem. City officials reached out to Bellingham Marine to see if there was any possibility of having docks in time for the weekend’s festivities.

Fortunately, Bellingham had an inventory of temporary timber docks waiting in a nearby plant. “The docks were built for the National Marine Manufacturer’s Association (NMMA) as part of an expansion project for the Miami International Boat Show Marina,” said Steve Ryder, Manager of Project Development for Bellingham Marine.

“NMMA officials graciously agreed to allow the City of Jacksonville to rent the docks as part of their rental inventory program. The only stipulation was that they have them back before Christmas, so they will be ready for the boat show in early February.”

On October 24th, Bellingham Marine began a two day install of 640 ft. of floating timber docks for the City to use as temporary moorage for the big game. With a bit of luck and some quick action on everyone’s part, the City, NMMA and Bellingham Marine were able to come together to save a favorite part of The World’s Largest Cocktail Party.