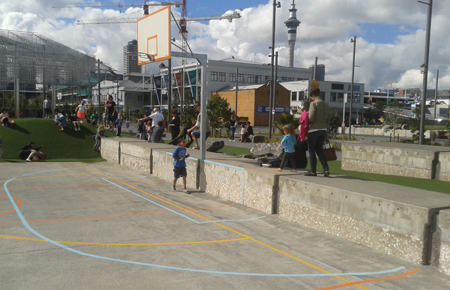 Salvaged from a nearby marina, the Unifloat pontoons at a Wynyard Public park offer a great example of how a concrete dock can be given a second life.

We’ve all head the phrase reduce, reuse, recycle. Reduce our level of consumption, reuse a product for another purpose rather than just throwing it away, and once a product can no longer be used recycle it.

When I was young my mom would save every glass jar that came into our house — relish jars, mayo jars, peanut butter jars, pickle jars you name it.  If it was glass, once the contents has been devoured she’d carefully remove the label, wash the jar and place it in the cupboard where it awaited its next life.  If it was a “good” jar it would become one of our drinking glasses, if it was a big mouthed jar it was used for canning (those must have been the bad jars).  If it didn’t fit into one of those categories she inevitably found a use for it somewhere around the house – cotton ball holder, money jar, and my favorite – caterpillar home.

I recently received some photos from a gentleman in New Zealand.  The pictures were of a public park in New Zealand’s Wynyard precinct.  What stood out to me was the park’s creative landscaping.  Carefully integrated throughout the park were old Unifloat® concrete dock modules that had been cleaned up and strategically placed.  Some were used to provide seating areas around the basketball court and other general gathering spaces; while others were functioning as retaining walls.  They did not look out of place but rather purposeful and intriguing in their use and placement.

The docks were salvaged from a rebuild project that was taking place at a nearby marina.  The marina was upgrading its facilities and the docks had seen the end of their useful life.  In most other circumstances, the docks would have been taken to a disposal facility or pieced out and recycled.  If the docks were still in good condition, they may have been sold to another marina or private dock owner for use until their useful life ended at which time they would ultimately be disposed of.

What I like about this story, is that somewhere along the line some people dared to be bold. They got creative and started thinking outside the confines of the dock’s predetermined life as just a dock.  I don’t know all the details of this story but in the end I’d image it was a win-win for all – the marina, the park, and ultimately the community. Environmentalist or not it’s hard to argue against the responsible management of waste and financial resources.