SANTA CRUZ HARBOR IS IN THE RECOVERY PROCESS 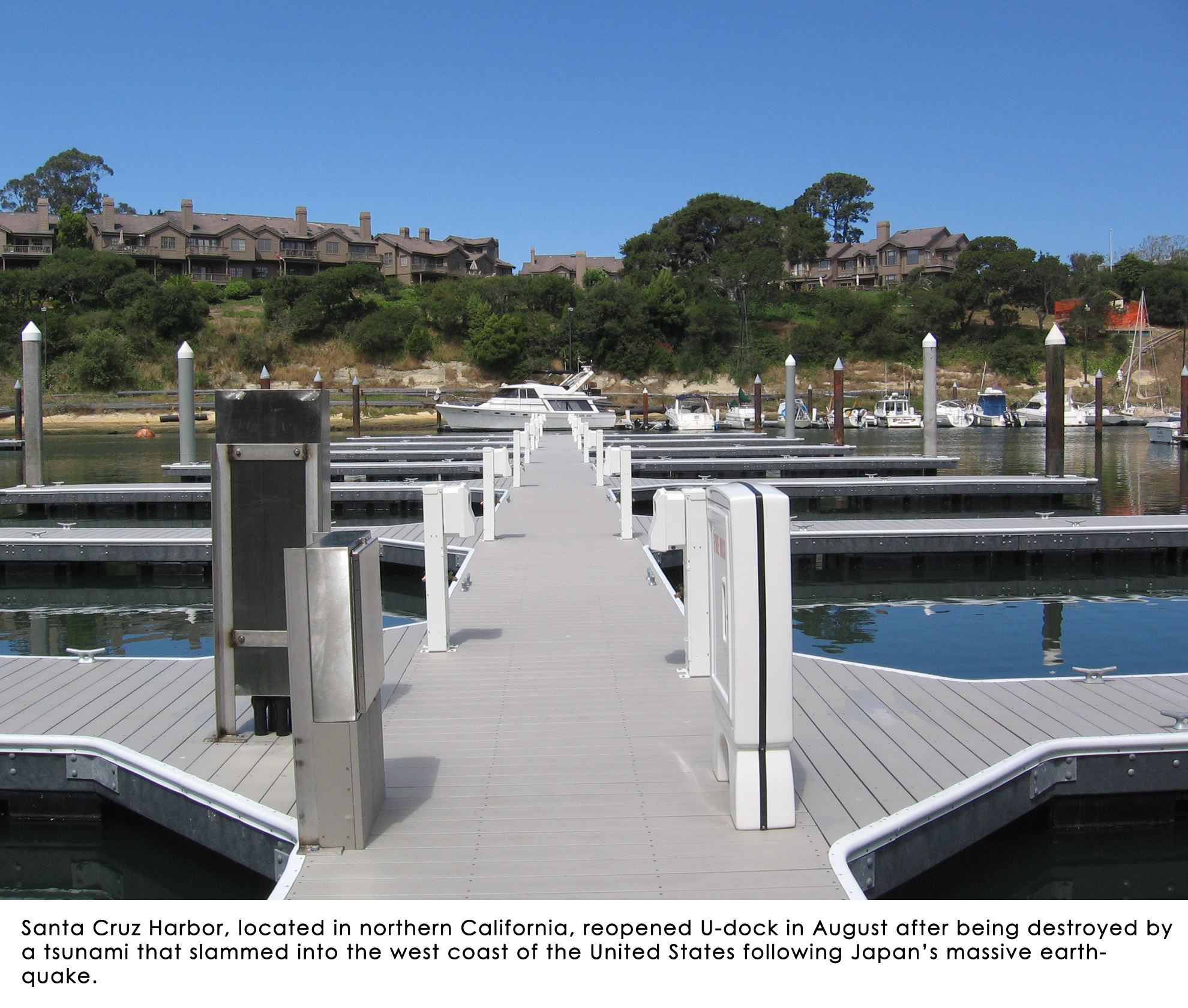 Residents of Santa Cruz are celebrating the rebuild of the area’s only harbor. On August 26th, the Santa Cruz Harbor hosted a grand reopening celebration. Port officials, government partners and numerous tenants of the marina were present.

When the Tsunami that was triggered by Japan’s massive earthquake in March slammed into the west coast of the United States, Santa Cruz Harbor was particularly hard hit. Large waves pounded the marina leaving a mess of destruction. It was reported that at least 20 boats were sunk and more than 100 were damaged. Damage to the harbor itself was estimated at more than $22 million.

Over a third of the marina’s docks were destroyed resulting in a number of displaced boaters and lost revenue for the Port. Eager to clean up the mess and get the marina back in working order, Santa Cruz quickly issued an RFP for the replacement of “U” dock, which sustained the greatest amount of damage.

By the first week in May, the Port District had awarded a contract for the replacement of “U” dock. Bellingham Marine was selected for the job.

A key requirement of the RFP was turnaround time. As the successful bidder, Bellingham Marine proved to the Port that they could turn the completed project around in just three months’ time. The average turnaround time for a project of this size is typically 6 months.

Set on meeting the Port District’s schedule, Bellingham Marine came up with a number of innovative strategies to shorten the typical turnaround time on the project including pre-installing some of the dock’s utility components prior to installation of the dock system in the water.

The project’s scope of work included the complete replacement of U dock totaling more than 6,300 square feet of walkway and fingers. Existing piling and gangways were reused but all utilities; including power, water and fire, as well as the floating docks were replaced from the top of the gangway down.

Designed by Ashton Engineering, the new docks at Santa Cruz feature an HDPE plastic lumber system supported by floats similar to a traditional timber dock system. Given the level of damage sustained by the marina, the Santa Cruz Port District engineers called for a two foot wave design for the new dock system.

The new berths at Santa Cruz’s “U” dock are extra strong. The dock includes 53 double berth slips for boats 30 feet in length with full utilities. “We couldn’t be happier with the look and feel of our new dock system,” said Lisa Ekers, Port Director for the Santa Cruz Harbor “Bellingham Marine said they could deliver, and they did. Our tenants are thrilled.”

Installation of the new docks was started the last week of July and completed August 16th.