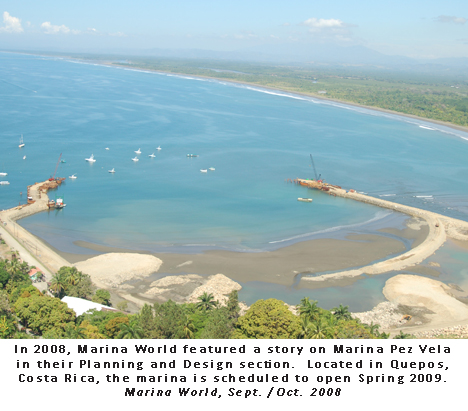 With just a few months to go before the boats move in, Marina Pez Vela is set tob ecome Costa Rica’s premier full-service marina facility. “We are incredibly excited at buyer demand and enthusiasm about the marina’s opening,” says project founder, Harold Lovelady. “The combination of our state-of-the-art facility and extraordinary location makes it an obvious choice for boaters and anglers.”

Take up by an international customer base has, indeed, been swift. Phase one of the 308-slip marina sold out by June promoting the release of phase two in July. This includes 40 slips with a starting price of US$175,000.

Designed and owned by sportfishing enthusiasts, Marina Pez Vela is located in the sportfishing mecca of Quepos. The marina will provide a safe haven and base of operations for fishing along the Pacific coast of Central America – opening up thousands of miles of ocean that were previously nearly impossible to fish. It will also include the first and only truly complete boatyard south of San Diego., California, and as such will meet the needs of an under-served market.