As you may be aware, Louisiana’s coastal landscape is washing away at an alarming rate; more than a football field is lost every hour to the Gulf. Home to half of the country’s oil refineries, miles of pipelines that serve 90% of the Nation’s offshore energy production and 30% of the Nation’s total oil and gas supply – the landscape on which all this is built is washing away. 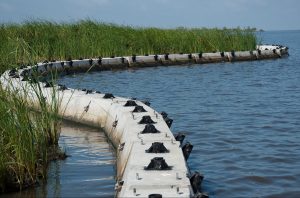 This innovative modular wall system is proving to be a strong contender in the fight to stop the rapid erosion of Louisiana’s marsh lands.

Although there are numerous forces that have led to the catastrophic level of destruction of Louisiana’s shorelines, a major force at play is wave action. Desperate to slow the rate of land loss, in 1997, Louisiana’s Department of Natural Resources and Conservation Service (DNRCS) started a research program focused on the development of a retaining wall type system that would stop the rapid loss of Louisiana’s marsh lands.

Numerous systems were developed, studied, and tried by Louisiana’s DNRCS between 1997 and 2012 but none were found to be a viable solution. In 2012, a team from Washington State submitted a concept for a buoyancy compensated erosion control module. The modules were installed along a 500’ section of wetland along with several other systems being tested.