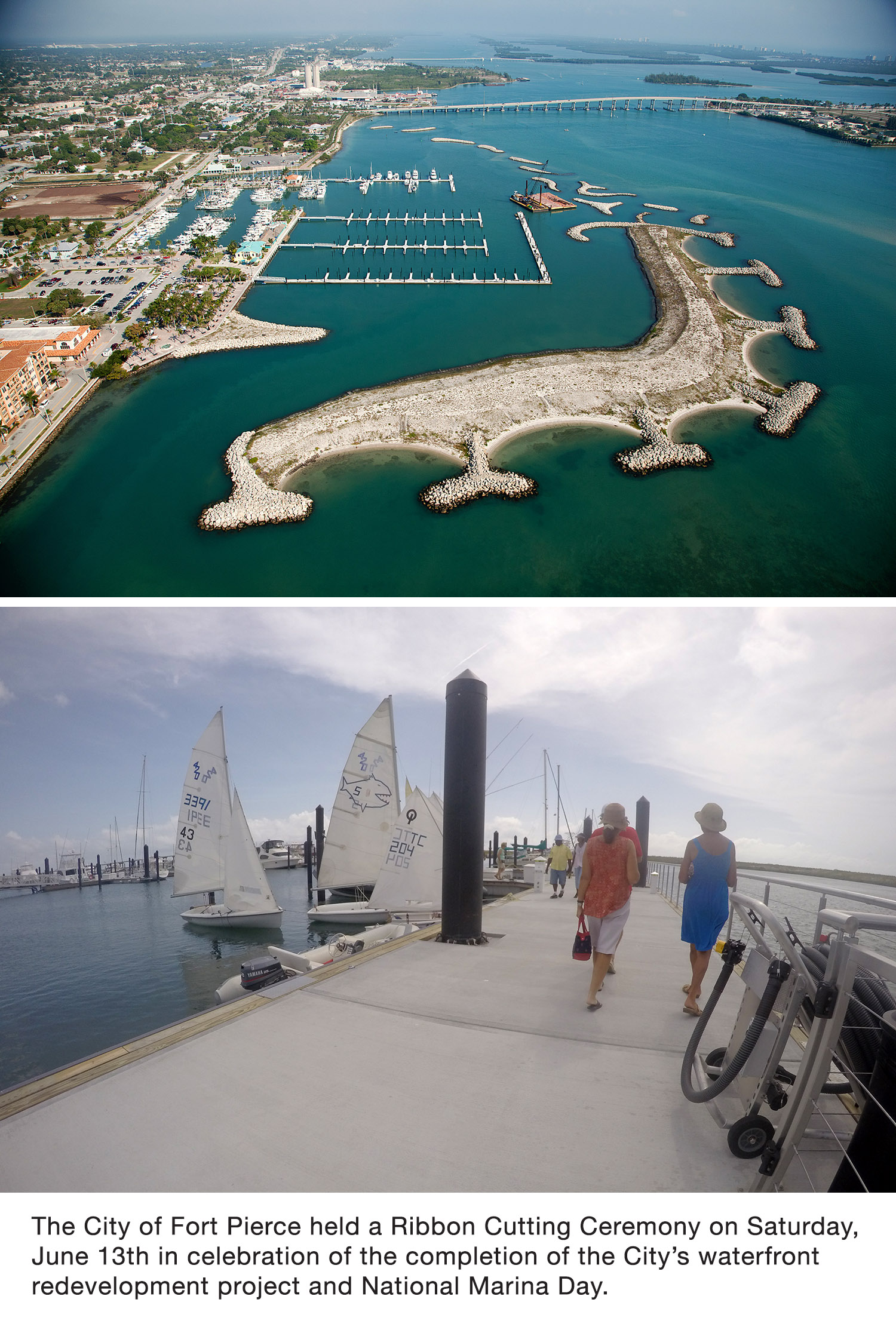 The City of Fort Pierce recently completed a $30 million waterfront project, which included the construction of 13 barrier islands and the addition of 137 wet slips to the City’s marina.

Fort Pierce, Florida – June 23, 2015 – The City of Fort Pierce held a Ribbon Cutting Ceremony on Saturday, June 13th in celebration of the completion of the City’s waterfront redevelopment project and National Marina Day.

The restoration and hazard mitigation project included the construction of thirteen islands and a new marina and floating wave attenuator in the City’s outer basin. The Islands provide critical storm protection for the new slips in the outer basin and public waterfront. The bulk of the funding for the nearly $31 million project was provided through FEMA and the City’s insurance proceeds from the Hurricanes. The State provided $3 million in disaster funds.

The City estimates that 800 -1,000 people showed up to give their support and to participate in the day’s festivities which included marina and island eco tours, educational booths, a lion fish round up tournament for charity, youth fishing rod giveaways, a farmers’ market, paddleboard and sailing demonstrations, and more.

“A special thanks to all the firms and individuals involved – Tetratech, Moffatt & Nichol, Bellingham Marine, and Hal Jones; we were blessed to have some of the industry’s greatest visionaries and best talent working on our project,” said Ed Seissiger. “It was a long, and at times, challenging journey to get to where we are today; but we are extremely proud of what the team has accomplished and all that has been created for the City as a result of our efforts.”

In 2004, Hurricanes Frances and Jeanne destroyed the slips in the City’s outer basin and damaged many of the slips in the inner basin. What followed was a ten year process. Funding could not be accessed to rebuild the outer basin until a plan to protect them was approved and permitted. The City explored a number of options and decided upon an island concept.

“Others in Florida have done rubble islands as a form of storm surge protection, so we knew the concept was viable, but we wanted to create lagoon habitat as well as provide habitat for shore birds on the islands; we wanted something that would not only protect the marina and the City’s waterfront but enhance marine life,” said Seissiger.

In December 2010, the City received the final approval needed from the Army Corps of Engineers to start construction of the Islands. The islands sit about 700 feet off shore; the largest of the thirteen islands is approximately 14 acres and the smallest 1/10th of an acre. The islands will provide juvenile fish sanctuary; mangroves and oyster shells were planted to attract birds, oyster larvae, fish and other marine life.

Construction of the docks in the outer basin was started in 2014 and bears the stamp of Bellingham Marine. Bellingham Marine was hired as the design/build General Contractor to design and manufacture the City’s new concrete floating docks, floating wave attenuator, and gangway systems. “This was a complete turnkey project,” said Kevin Thompson, General Manager of Bellingham’s Southeast Division. “We self-performed everything from the top of the gangways down, including all utility work; the only work we did not do was the pile driving. It was a pleasure to be able to partner with the City of Fort Pierce on this extraordinary project.”

Situated on the Indian River near the Fort Pierce Inlet on Florida’s east coast, the City’s marina is located at 1 Avenue A and is easily accessible by both land and sea.