Understanding Walers: What is a Waler?

Walers are structural beams mounted flush to the deck of the Unifloat concrete floating dock from Bellingham Marine. They attach to the float by long rods threaded at the ends. Called “through rods,” they span the width of the float and are held in place with washers and nuts. 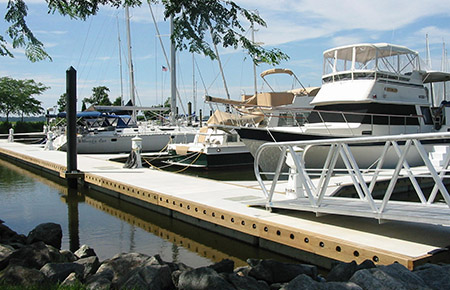 Concrete floating dock marinas are manufactured and assembled in modules. Modular construction allows bending at the float connections to provide flexibility appropriate to a structure on water subject to wave action. In addition, the manufacture and installation of the docks is more manageable when floats are cast and transported in modules. A further benefit is that modules can be removed and replaced; in the unlikely event that this is necessary, individual modules can be disassembled and modified as needed.

The vital structural purpose of the walers is to connect the float modules. In a Unifloat marina, no other connection method, such as hinges between floats, is necessary, or in fact desirable, as the waler system has proven itself under the harshest tests nature can deliver. Walers perform two other functions. First, they protect the concrete floating dock from impact from a docking boat. Secondly, they present a gentle surface to the hull of a boat using the moorage, especially when the walers are built of structural timbers and when combined with protective rub rails.

The birth of the waler.
The modern Unifloat waler system is the direct descendent of the waler-connected concrete floating dock concept patented by Ernest M. Usab of Long Beach, CA, on October 28, 1958. Usab was awarded U.S. Patent 2857872 and licensed it to Bellingham Marine the same year. Bellingham Marine introduced the technology to the world for the manufacture and construction of Shilshole Bay Marina in Seattle, Washington. In the following years it became apparent that Usab’s concept would revolutionize the marina industry and Bellingham Marine bought the patent.

Since that first project, Bellingham Marine has continuously improved the technology and has now manufactured and installed more than 20 million square feet of docks in tens of thousands of installations worldwide. The waler-equipped floats installed in Shilshole Bay Marina served for more than fifty years until the marina was refurbished to accommodate today’s larger boats. The marina was outfitted with new concrete docks, again built by Bellingham Marine. The final chapter attesting to the excellence and durability of Usab’s original design has not yet been written—many of Shilshole’s original floats were sold to private parties for residential and marina docks—and are still in service.

To understand the importance of distributed loads, consider alternate float connection systems in use today. Typical are systems which employ heavy-duty hinged steel bolts or large stranded cables at the corners of the floats. There are two problems with these systems. First, the connection hardware can, and does fail. It may weaken under repeated bending and attack from galvanic corrosion. Second, forces on the floats are not distributed, but are concentrated at the corners of the floats. Thus enormous shear loads are focused where they can result in irreparable damage to the concrete body of the float.

A practical example: follow the stresses
A large powerboat is moored to a concrete floating dock in a storm. The boat’s considerable “sail area,” the currents in the marina, and the pulse of waves against the boat are all transmitted through its mooring lines into the floating concrete dock. These forces translate through the dock and are felt as shear forces at the module connections. In our example, the resultant shear force at the connection points between the floats is 10,000 pounds. In an actual marina in an actual storm, it could be more or less, but 10,000 lbs. gives us a round number to work with. 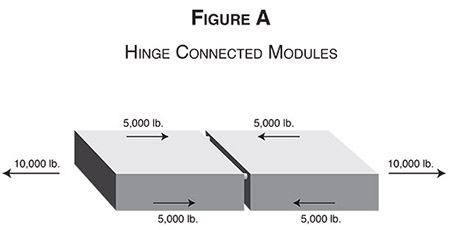 On the hinged or cable-connected system, the load is applied to the corners of the floats as a shear load of 5,000 lbs. applied equally to each of the four corners. The load is transferred through the hinge or cable to the concrete at the corners. The concrete structure must contend with a shear load of 5,000 lbs. at the vulnerable corners of the floats. 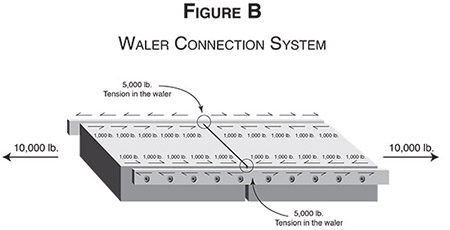 By contrast, a Unifloat system with a typical complement of 10 through rods receives the same 10,000 pound load. Unlike the hinged system, where loads are concentrated at the corners, the shear load is translated up and down the waler and distributed among all the through-rod entry/exit points. Each of the 20 entry/exit points in the concrete structure must contend with 1,000 lbs. of shear force. The waler system, with its distributed-load design, has reduced the load on the concrete structure by 80%.

Other distributed load systems
Distributed-load engineered structures are everywhere around us. Donald Douglass and John Northrop transformed airframe design by using the skin of the airplane for load distribution in the DC-3. Cable-stayed bridges (see photo nearby) are easy-to-understand examples of distributed loads. In a more commonplace example, consider your house, constructed of dimensional lumber sandwiched between exterior plywood cladding and interior sheet rock. While houses are ubiquitous and taken for granted, they are actually marvels of distributed load technology as proven by their amazing strength in earthquakes.

The benefits of structural timber
As stated earlier, the vast majority of Unifloat marinas employ walers made of structural timbers. Marina owners intuitively ask, is a wood-waler marina as strong as it needs to be? It’s human nature to assume that floats connected by steel bolts or cables must be stronger. While it may seem counterintuitive, the choice of structural timber for walers is a deliberate decision taken for the purpose of building the strongest, most durable, most practical and most attractive marina on the market.

The selection of timber as the material of choice for walers is based on structural engineering considerations. Wood is the most widely-used construction material in the world. It’s the perfect material for corrosive environments that are in constant motion. Wood is a natural material. Its cell structure has adapted to bending motion. It maintains its strength under repeated bending motion when metal structures would degrade and fail under the same conditions. Wood can take more sudden impact without permanent deformation than equivalent metal structures. Wood is impervious to galvanic corrosion.

The test of a strong marina.
Most importantly, timber has proven itself in marinas around the world. The American coastline from the East Coast through Florida and around the Gulf of Mexico to Texas is a test laboratory for wood-waler marinas. They have been tested over the years in some of the most horrific storms recorded, and the wood-waler system has been more than up to the task. Hurricane Ike roared into Galveston Bay on September 13, 2008 and took aim at Unifloat-equipped Bayland Marina in Baytown, Texas. The “100-year storm” event was the third costliest hurricane ever to make landfall in the US. The Unifloat marina took the worst of the storm until a tide surge lifted the floats over the tops of the pilings. The floats then drifted toward a lee shore and were stopped by a line of trees. When the storm passed, marina officials found the marina largely intact on the beach across the bay…the floats still connected together by the wood walers!

Conclusion
Leonardo da Vinci said, “Simplicity is the ultimate sophistication.” He could have been describing the Unifloat waler-connection system. While it may look like a simple idea, Ernest Usab’s method for connecting the floats using a distributed-load concept is an elegant engineering solution that has proven its genius over time. While Bellingham Marine can, and has, built marinas with walers of other materials, the structural-timber waler is the standard by which all other float-connection systems are measured.