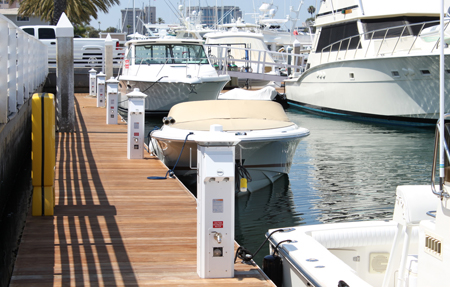 An aging marina can be updated with a few small improvements.

If you have an aging marina, and a complete replacement is not feasible there are a number of things you can do to update and beautify your property without taking on a comprehensive rebuild.

Lido Yacht Anchorage, located in Newport Beach, Calif. had originally planned to replace the marina’s aging timber docks with a modern concrete floating dock system and upgrade their utilities.  However, a comprehensive renovation would require dredge work and replacement of the marina’s seawall as well as an upgrade in the marina’s shore power.  After further evaluation, this option was determined not practical for the marina at the time.

So, rather than take on a comprehensive renovation project, the owners decided to focus on repairing and beautifying the marina they had.  This decision not only increased the service life of the marina’s docks but gave the tenants and property owners a facility they were proud to show off.

Repair work included a complete replacement of the marina’s existing plywood decking with a hardwood IPE deck.   Crews also repaired and replaced several stringers that had dry rot and added torsion bars down the length of the fingers to provider greater stability.  Pile guides were repaired and parts replaced where needed.

The marina also added a new amenity – a deionized water system.  Before, boat owners, if they wanted to wash their boats with deionized water had to supply and install their own system near their slip.  Owners would place the large deionizing systems on the tri-frame or walkway near their boat.   This not only became an eye sore and cluttered up the walkways on the docks but was an inconvenience for the tenants to maintain.  As part of the improvement project, Lido Yacht Anchorage decided to add a deionizing water system to service the entire marina.  A central area was built to house the deionizing tanks and separate lines were run to each slip.

In addition to the new water system, the marina replaced all the existing power centers with new stainless steel power pedestals and added metering for potable water, power, and deionized water so that they could set up a use fee based on consumption.

The work performed at Lido is just one example of what a marina can do to update their facility without undergoing a costly and comprehensive renovation.